SEN Lines And Nadis In Bodywork

About SEN and Nadis

Sen is the Thai word for ‘Line’. It has the same concept as Prana Nadi used in Yogic terminology and the terms are interchangeable. It can also be compared with myofascial meridians. The Sanskrit word for energy meridians lines is Nadi. It means stream or movement. In yoga theory, nadis are said to carry life force energies known as prana. In the physical body, the nadis are channels carrying air, water, nutrients, blood and other bodily fluids around and are similar to the arteries, veins, capillaries, bronchioles, nerves, lymph canals and so on. In yoga theory, the physical body is often referred to as “the gross body” (Sanskrit Sthula sarira).

In subtle and causal body, the nadis are channels for so called cosmic, vital, seminal, mental, intellectual, etc. energies (collectively described as prana) and are important for sensations, consciousness and the spiritual aura.

Sen are Prana Nadis or energetic pathways of the life giving breath in the body. These lines form the matrix, or energetic body. These pathways correlate and communicate with each other. Their nexus of communication are the chakras, major concentrations or vortices of energy. They also flow through minor chakras which are called by many different names; Lom or wind gates, Marma, Muladra, Granthis, knots and acupuncture points. The Sen lines move this energy to the various individual parts of us.

Upon inspection, we find many of these knots to be, in fact, the same points used in traditional acupuncture. Many also correspond with the common location of trigger points.

How is it Related to Myofascia

Modern Myofascia research confirms that arteries, veins, and nerves travel to various parts of the body using the fascia as scaffolding and support. The fascia itself wraps the various body parts and provides them structural integrity and acts as a medium for force transmission and dispersion.

With this understanding, one can then observe that SEN form the space through which life flows (blood, lymph, nerves and bio mechanical force) in a body. When a blockage arises in the fascia due to adhesion, then the SEN is constricted, and the flow of life impeded resulting in disease. Further, if a muscle gets tightened due to a trigger point, then the resulting bulge in a muscle also can reduce the fascia space around it, resulting in blocks.
If the issue persists or if the blockage is close to the internal organs of the body then it can impede nutrient supply and toxin elimination thus affecting the normal healthy functioning of organs.

History of SEN in Thai Bodywork 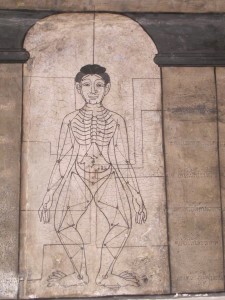 Phraa Wat Chetuphon Epigraphies: The earliest known references to them in the traditional medicine of Thailand is found on the premises of Phra Wat  Chetuphon more commonly known as Wat PO, in Bangkok. This record appears in the form of a series of actual stone carvings called the “ Medical Texts which His Majesty King Rama III had engraved at  Phra Chetuphon in B.E. 2375 (AD 1832)”. These were commissioned public works based on older original Thai Traditional Medicine Codex.

In the traditional literature of Thailand, an Indian born Tibetan Yogic Doctor or Physician named Father Shivago Komolaboat (Jivaka), is credited with distilling the theory of 72, 000 lines into ten primary lines. The Thais call these ten lines Sip Sen. Sip Sen are thought to be energetic pathways of the life giving breath in the body. These lines actually form the Matrix, Energetic or Prana body. In Shivago’s day it commonly took 20 or thirty years for an apprentice doctor to become recognized as a physician. One of the reasons for this was simply the volume, the number of various concepts to be learned and memorized. If one had to learn thousands of lines, points, Chakra etc. it would take many years. However, by distilling the “thousands i.e. infinite” number to few the time to function for the prospective physician was greatly reduced. Think of how an interstate highway distils many surface streets into one or a few national highways as an example.

There are not only 10 Sen Lines (Sip Sen). In some illustrations and or oral traditions there are 72, 000. In some depictions as many as 350,000! If you consider the idea that every part of us needs this vital essence or life energy and by every part I refer not just to soft tissue planes (Myofascial Channels and or Trans-subcutaneous Muscular Channels- TSM’s), organs and skeleton but to every living cell then the larger numbers as symbolic of infinity. Similar to the “Theory of Ten Thousand Things” in Traditional Chinese Medicine.

The three primary Sen (Tri-Se: Sumana, Ittha, Pingkala) develop in the embryo, and within eight weeks all the main chakras and subtle nerves are formed. Sip Sen( or ten lines), generate, maintain and correct a harmonious state in the body/ mind/  psyche.

In theory, the ten lines generate, maintain and correct a harmonious balance or state in the body / mind / psyche, or spirit. Chakras function on one level as cosmic windows facilitating an exchange of energy between the human body and the universe. The various lines then move this energy to the individual parts of us. The lines, although responsive to the initial energy or stimulation from the chakras may also function to tune or to assist the chakra function in turn. This picture is one of a reciprocal system. Moving, adjusting, stretching or otherwise affecting the lines into particular relationships may, in turn, focus more or less energy or Prana to (or through) one or more particular chakras.

The Sen may also function to tune or to assist the chakra function. Think of a two way transreceiver. By moving the body into the various postures or Asanas, we change the relationships of the lines to each other. This may enhance or focus more or less energy to particular chakras. This concept sees the lines as a sort of antenna. Change the alignment of the antenna and get a better or a different picture.

If Chakra are the the transformers and generating stations, then the Sen/ Nadi are the network and sub-nets of and for the distribution of energy.

What flows in the Sen?

The traditional term is Lom or “Wind”. However, Lom is more than the elemental force one of the “Thaat Thang Sii” is is literally wind, breath and vitality. Thai Ayurveda calls it Prana Yama or vital breath of life. It is the essence of vitality and life force. This essence or force is known in all cultures by different names such as Taoist Qi, Chi, Ki, Huna (Mana), Elan Vital, Ka, Orgonne, Shakti, Holy Spirit, African Ashe.

There is an almost exact correlation between classic Ayurveda (Tibet, India, and Sri Lanka) and Thai Sen, even the names for most are virtually identical. The major difference being between Thai Pali and Classical Sanskrit. Each Sen follows a unique pathway and is exclusive to one side of the body. The Sen themselves are divided up into traditional categories of Sun / Moon, Male / Female alignment (Left side lines are Lunar/ female and Right side lines are Solar/ male). This could also be an indication of polarity.

In practice the different traditional schools and specific to regions place more or less emphasis on addressing the Sen Lines and also as to specifically how to do it! Some stress Thai Traditional Massage Sen lines over points and others points (Lom/ Marma) over the Sen. This can vary widely from school to school. The biggest variation is found in the western schools in the US in which there is very little education about the traditional theories such as Sen Lines and therefore less or little clinical emphasis.

Other systems with similar ideas

The Indian Ayurveda correlations have been discussed above. There also appear to be correlations conceptually in other systems such as Traditional Chinese Medicine Acupuncture. The nearest overlapping examples are found in the Theory of TSM’s or Trans-subcutaneous Muscular Channels. TSM’s relate to the organs as due the more common meridians however are broad and general and appear to follow Fascial planes (Myofascial Channels or Chains).

Ayurbalance massage Course In India, organized by Rasovai School, is following the theme of unblocking the Nadis/Sen as per Ayurvedic and Thai medicinal science which are similar to Myofascial meridians. Ayurbalance Massage is based on either opening the blockages on the SENs/ Nadis/Myofascial meridians+ general Fascia or stretching them or contracting them and bringing balance to them using pressure movements with hands, fingers, knuckles, fist, forearm and elbow.

In the massage we try to work the SEN following the space between two muscles or between muscle and bone. This space is filled with soft connective tissue – FASCIA formed from collagen proteins. The SEN can also travel over the center of the muscle belly that form toned peaks of the human musculature. Fascial release/balance is the theme of the Ayurbalance Massage. Every stroke that is given in Ayurbalance has a purpose. Each stroke is working on the Sen/Myofascial Meridians, Myofascia- Covering the muscles and various Inner Core muscles. The Ayurbalance work brings a reharmonizing, rebalancing result into the whole.